I recently received a grant from The Berit Wallenberg Foundation to kick off a project called The Introduction of Battle Axe Pottery in Sweden. Battle Axe culture is a regional version of the Corded Ware culture complex which in the 3rd Millennium BC spans an area from the Netherlands to Finland, Sweden to Ukraine. What this phenomenon, usually manifested in crouched inhumation burials containing finely crafted beakers and/or battle axes, actually represents continues to be debated within archaeology since the early 2oth Century. There are many similarities between regions, but there are also notable differences. Is migration or diffusion of ideas the main means of the spread of the material culture? A combination? How can we tell the difference?

In my dissertation I focused on the relationship between the Battle Axe culture and the Pitted Ware culture which both preceeded it and was contemporary with it in parts of Sweden. One aspect that really caught my attention was that of the pottery traditions which differed in many notable ways, not just superficially as in decorations, but more profoundly in craft choices and social organisation of that craft. Battle Axe pottery represents a technological break with previous traditions and seems to appear as a fully formed craft with little or no variation or learning curve. This is in contrast with the stone technology and settlement patterns which have considerable overlap with the Pitted Ware culture in Eastern Sweden and the Funnel Beaker culture in the South and West. 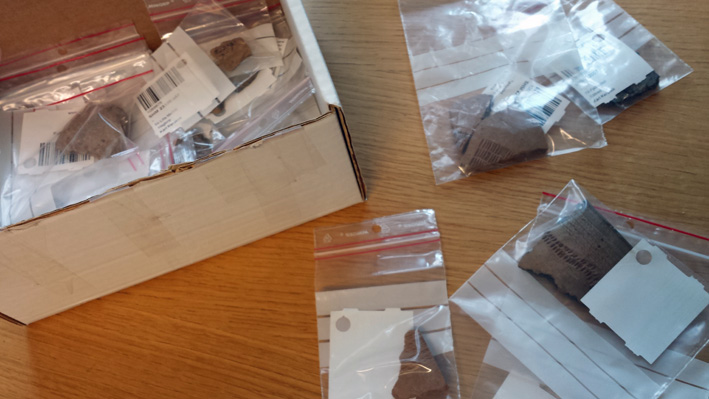 Swedish Battle Axe pottery differs in some ways from ”classic” Corded Ware pottery found on the continent, including Denmark. It is remarkably similar to certain regional types of Finnish Corded Ware however. I was therefore very happy to be approached last year by Dr Elisabeth Holmqvist-Saukkonen of the University of Helsinki, who has started a major project called Untangling Corded Ware: Provenancing Battle Axe Culture Pottery of Southern Finland, financed by the Academy of Finland. Elisabeth does laboratory analysis on pottery using scanning electron microscopy (FESEM-EDX), investigating the micro-structure of ceramic fabrics. In the case of corded-ware pottery this is doubly interesting as it is generally tempered with grog: crushed sherds of older pots.

With the backing of the Wallenberg Foundation and the generous permission of the Museum of History as well as the National Heritage Board here in Sweden, I have now selected a number of battle-axe pottery sherds to be analysed by Elisabeth. These will be compared to the Finnish corded-ware sherds she has already analysed. I just finished photographing them and this weekend I’ll bring them to Helsinki.